Skip to content Skip to main menu
« « Prev
Random
Next » »

“Walmart made $17 billion dollars last year. They can well afford to pay us over the poverty line.”
– Givens Thomas1

Boycott Walmart and other corporate giants.  They are planning to open on Thanksgiving Day this year including Kmart, Target, Macy’s, JcPenny’s, Sears, Kohl’s, Staples, Whole Foods, and Best Buy1.  Many of them for the first time ever.

It’s astonishing the amount of greed and lack of family values these companies have.  They don’t seem to care about their workers’ low wages.  It’s all about keeping their stocks up. Walmart full-time employees are pushing for a minimum of $25,000 a year which is just above the poverty line1.  Walmart is actually having a food drive to feed its under paid employees1.  All they care about is making as much money as possible.  People are outraged, and it’s all over twitter:

The FACT that .@Walmart employees live in #poverty & need food drives while their execs reap profits is indefensible #BoycottWalmart 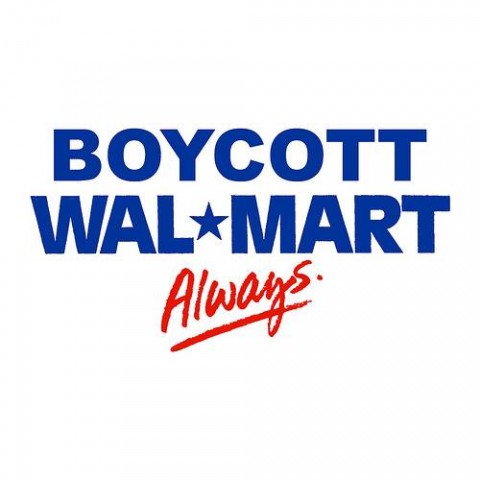 The 6 Walton heirs own more wealth than the bottom 40 percent of Americans2.   Of course they could afford to pay their employees a little more.  If you work full-time then you shouldn’t be living in poverty.  We need to raise the minimum wage in this country.  Walmart even takes out insurance on their own employees to make money off their deaths.  Walmart buys merchandise super cheap from China and puts local Americans out of business with their low prices and slave wages4.

Every dollar we spend is a vote for the kind of world we want to live in, and many people are tired of living in a world controlled by corporate greed.  It’s time to start putting our money where it counts, because without consumers these companies are worthless.  Stay informed about where your money is going, and buy local whenever possible.

Time and time again, when Walmart workers have come together to call on the company to address low wages, erratic schedules, paltry benefits, and unacceptable working conditions, the company has attempted to silence or outright fire them. In fact, the National Labor Relations Board (NLRB) recently announced it’s pursuing a rare national complaint against Walmart for retaliating against and threatening more than 100 workers.

As Black Friday approaches, chinks in the company’s armor are starting to mount. We need to stand together and make our voices heard so that Walmart obeys the law and does right by its employees. Will you join me in demanding that Walmart comply with federal law and stop intimidating workers?5