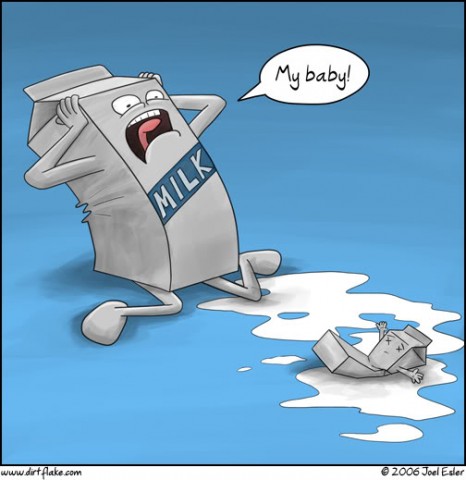 Ever hear the saying, “Don’t cry over spilled milk?” It means a lot more than may be initially apparent. Often times, people beat themselves up over insignificant mistakes or shortcomings. Sometimes people have a single seemingly negative experience that causes them to form a limiting belief about themselves or the world which hinders their success.  These people often appear bitter, jaded or insecure. All it takes is a small shift in thinking to transform their lives. One might tell themselves, “I’m so clumsy! I can’t do anything right.” or they can simply clean the mess and have more positive self-talk like, “It’s okay. That milk was probably going sour anyway.”

In each moment, we are perceiving reality through the lens of our senses, and the way we choose to interpret it is completely unique to who we are and what we believe from past experiences. If you’re speaking and some dude walks out of the room, you might take it personally and think, “He must be bored by what I’m saying. I must be boring,” or you can have a more optimistic outlook and think, “He must really have to pee, because what I’m saying is awesome.” 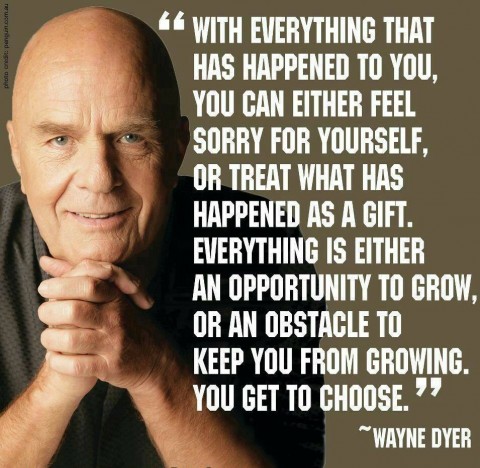 Focus on becoming aware of any negative belief patterns that surface in various situations, and take time to remember the earliest event that triggered you to think that way. Then, you can look for evidence to disprove the negative beliefs. For example, if you think you’re too fat to get a girlfriend, look for examples of fat men who have girlfriends. The more you prove to yourself that your fears are irrational, the easier it will be to switch to a more confident mindset.

Ever since the movie “The Secret” came out, the idea that you create your reality has been spreading like wildfire, and whether you believe in the law of attraction or not, hopefully now you can at least see how you create your experience of reality which dramatically affects your actions and results. If you don’t believe something is possible for you, the motivation to strive for it will be nonexistent. Keep an open mind, and practice seeing things from different perspectives. If someone is feeling upset, see if you can say something that reframes what’s bothering them and shines a more positive light. Find ways of seeing your supposed weaknesses as strengths. If you feel awkward approaching people in social situations, and think you might be viewed as an annoyance, you might reframe it by flipping the script and thinking something like, “I’m awesome, and all these people want me to approach them.”

Joe asked God, “How much is a penny worth in Heaven?”

Joe asked, “How long is a minute in Heaven?”

Joe asked for a penny.

“Aaron T. Beck developed cognitive therapy in the 1960s. Beck worked with patients that had been diagnosed with depression, and found that negative thoughts would come into minds of these patients. Beck helped his patients recognize the impact of their negative thoughts, and aided them in shifting their mindset to think more positively—eventually lessening or even getting rid of the patient’s depression. This process was termed cognitive restructuring – the main goal of which was to rethink negative thoughts and turn them into positive thoughts“